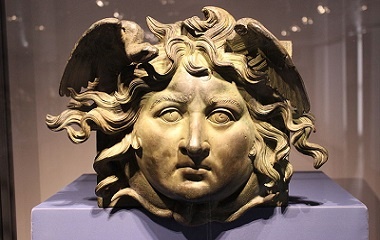 I was developing a lesson for a 6th-grade unit on poetry and mythology. We would read two different Medusa poems, I decided, and then students would have a chance to write their own poems addressed to Medusa. The first poem I selected was Sylvia Plath’s “Medusa,” The second, by Lynn Schmeidler, was titled “Goodbye Letter to the Medusa That Was My BFF.” When I sent out a lesson plan to the classroom teachers that I was working with, I invited questions or suggestions, as I always do. This time, I got an email back. The teacher was concerned that the Schmeidler poem would be too difficult for the students.

I was taken aback—if anything, I had thought of the Plath poem as the more difficult one, though really, thinking of poems on a scale of difficulty felt wrong too. I had thought of the Lynn Schmeidler poem as one students would connect to—it had “BFF” in the title, it mentioned things like binge-watching TV, strip malls, and gluten-free biscotti. It was awash in contemporary life. But when I looked back at the poem, I also found phrases like “I admire your way with oglers, the fatal/ and muddy roads of all your hands” and “a talent for recognizing/ the piercable, combined with a whisper no one understands.”

At first I felt like I had to defend myself. I wondered if I had been choosing the wrong sorts of poems; I wondered if I hadn’t been thinking enough about the students. Was I failing in my goal to help these students access poetry by bringing them poems that were inaccessible?

The thing was, these poems weren’t any more difficult than countless others that I’d brought students in the past years. But what I had been doing—teaching difficult poems—was something I’d been doing by instinct, without knowing precisely why it felt so important.

When I select poems to teach, I don’t think first about the difficulty of the language, the vocabulary, the references. I look, first and foremost, for poetry that will surprise students—that will surprise their preconceptions of what poetry is, what writing is, what language is. I want them to be surprised because I think of surprise as a sort of expansion or explosion of your idea of a thing. Because I think that to create a wider view of poetry or writing means that it is more possible to write.

Sometimes, that leads me to teach poems whose language is plain and every day, in a voice students recognize as closer to their own voices than to their idea of poetry. And sometimes that leads to poems with difficult language, or complex constructions, things that seem difficult to understand.

I remember in elementary school, our classrooms had books arranged in bins by reading level, and you had to read a certain number of books at your current level before moving on to the next bin. The message was: “read what you’ll understand,” and “some of these are too difficult for you to read.” Outside of the classroom, I went to the library and brought home stacks of books higher than I could carry. In the library, books were arranged instead by topic, genre, author. The message: “read what you’re interested in,” and “read what you like.”

In school, reading is evaluated through standardized testing for “comprehension”—where comprehension means filling in the correct multiple-choice bubble. It’s not a type of reading that has any relationship to “read what you’re interested in,” or even “find interest in reading.” It’s about reading for answers, correct ones.

When that teacher asked me if a poem I had selected might be too difficult for her 6th-grade students, I bristled at the suggestion. But it was, of course, too difficult, if the objective had been for students to comprehend it in the way that leads to a passing score on a multiple-choice test. I, too, would likely have failed a comprehension test on that particular poem. I was bringing it to students not because I understood it, but because it interested me. It surprised me, and I thought it might also surprise them.

The teacher suggested modifications—adding definitions of all the difficult words to the printouts of the poem, or explaining the words to the students before reading the poem aloud. These were reasonable suggestions, but again, I got defensive. That’s not how you read poetry, I thought. Which of course is not really what I meant—on a second or third or fourth read of a poem, I often look up words or references, I follow the linguistic and cultural curiosities that the poem has sparked in me. But if a poem became an artifact of its vocabulary—a sheet sprinkled with glossaries of  obscure words—I feared that we would lose that excitement of reading it, the experience of the poem itself. Maybe I didn’t want students to understand the poem, but only to like it, or to dislike it, or to react to it in some way.

Later, when I got over my bristling, defensive reaction, I realized something. I didn’t want vocabulary lists written all over the poems I was teaching, and I didn’t want to teach “easier” poems. But what I wanted from these students was a type of reading that they didn’t know how to do, and so I would have to teach them. They had been taught, when reading, to circle every word they didn’t know—a good strategy when reading for a comprehension test. But when I imagined these poems read with that strategy, I saw a page crowded with circles, a visual manifestation of confusion, a way of reading that would create and magnify a feeling of alienation.

So the next time I taught a difficult poem, I asked students to circle the lines that they liked—those would be the things we paid attention to, that we talked about. Sometimes, the lines they liked were the ones that they understood. Sometimes the lines they liked were lines that they didn’t understand at all, but that for some other reason—their sound, their rhythm, their strangeness—they were curious about. We talked about those lines, and what they liked about them, what the words made them think of. It gave us an entry into those difficult poems, gave each student their own purchase on it. And from those circled lines, they started interpreting the poem, leaping across and into those parts of the poem whose words they didn’t understand. They became more confident, and less afraid of being wrong.

Medusa, you are beautiful
in your own unique way.
We both sometimes don’t
admire ourselves.

Medusa, I think you should
admire yourself like you
used to, even though
people call you hideous.
Forget what all the haters
say.

This was not some new idea that I created for the class; I was simply teaching the way that I, as a writer, read poems. I begin with the parts that I like. It’s a simple, almost childish way of approaching something. And so it didn’t take long to teach these children, again, to read that way. To read as writers, not for testable comprehension, but for engagement, ideas, or inspiration.

You have a different look now I see
I always thought you were better than me
Your eyes shine like the moon and stars
And then when I try to see them they seem too far
I am behind bars, I need to escape
I have belief in you and I have trust in you, I have faith
I’m home and I’m wondering about you
I don’t know where you’re at, I have no clue.

I encouraged these students to lift lines from the poems they were reading and incorporate them in their own poems, or to read and gather exciting words and work them into their writing. Through this, students began to write poems with vocabulary and structure that were far above their “reading level,” but they were learning that language through a sense of intuition, and creativity, and play.

Friend, bestie, whatever you
wanted to be called.
You build the life of my time,
when I broke you built
me back up, building a wall
between the rest of the
world.

When I talk with students about a poem, the one question that I never ask is What does it mean? My go-to set of questions is more oblique. What stands out to you? What does this make you think about? What are the first things you notice? Is there anything surprising or strange? Sometimes, in our conversations, we wind up unpacking complex vocabulary and sentence structure, but the impetus for this is curiosity instead of confusion. My students are learning to ask questions of a poem without expecting a multiple-choice answer. They’re learning to read.

Hello, O hello dearest Medusa,
I tremble in your ragged footsteps
as you proudly walk over mine.
I wonder if you are real or not,
but just give me a sign.
Is it true you can eliminate my mind?
If so, how would I know, the way you walk the way you talk?
I’m only but a small glow.
You are a majestic python
as I am a mouse from above.
You slither through thick black mud
and I hop over shiny leaves.
As you hold a golden crest,
I hold a wooden mess.
O how I wish I could be you.

About the author:
Erika Luckert is a writer from Edmonton, Alberta. She was a nominee for the Canadian National Magazine Award in Poetry, and a winner of the 92Y/Boston Review Discovery Prize. Erika has taught poetry and creative writing to a wide range of students, from patients in hospital wards, to adult community members, to school-aged children of all grade levels in both the United States and Canada. Erika spent two years as the writer-in-residence at Westglen School, where she worked with students and staff to research and write the story of its 75-year history. She currently teaches writing and literature at Hunter College. She is a teaching artist with Teachers & Writers Collaborative and writes poetry, nonfiction, and plays, and also translates from the French, all artistic disciplines which she enjoys bringing into the classroom. Her work has appeared or is forthcoming in Denver Quarterly, The Indiana Review, CALYX, Room Magazine, Measure, Atticus Review, The Boston Review, and others.