While the following article may be a little different than usual for this magazine, we were struck by the interesting possibilities it seemed to hold for the writer and writing teacher—Editor

When asked to lead a tour of one of her favorite rooms at New York’s Metropolitan Museum of Art, Mary Carruthers, chair of the department of English at New York University and director of the Center for Research in the Middle Ages and the Renaissance, chose the Liberal Arts Studiolo from the Ducal Palace at Gubbio, Italy. Designed and used by the Duke of Urbino, one of the leading intellectuals and military men of the Renaissance, this exquisite trapezoid room is fifteen by eleven feet wide, with an ornate, sixteen-foot-high ceiling of raised, jewel-like gilded octagons. The walls are a series of panels made of the finest fruit woods, depicting half-open cupboards above lecterns, benches, and finely wrought scrollwork. Every element in the room bespeaks the workings of a commanding, precise, and brilliant mind.

The Duke’s private study belies what we know of historical fact: Urbino was Italy’ s—and Europe’s—supreme military commander. Yet the mood here is gentle. The Duke was an ambitious leader, an aristocrat, and a rigorous intellectual, but the images with which he surrounded himself speak of play—a parrot, a drum, a lute, and books. At the same time, the space seems to demand that one stand up a little straighter, to do one’s best, whatever that might be.

The Studiolo at Gubbio, built in the 1470s, was designed at the same time that Italian painters discovered linear perspective. The room embodies the moment when the Middle Ages became the Renaissance. Science and art were one; mystical belief and scientific inquiry a unit. The light that beams in from three strategically placed windows creates an easy sense of intimacy, yet the wood-paneled walls also disorient. Objects move eerily in and out of the lattice-doored closets—each door is ajar, inviting eye and body closer. But these things are an artistic construct, an optical illusion. The walls are panels of wood intarsia, intricate designs of inlaid light and dark woods. With his artisans and designers, the Duke created a room that is an extended trompe l’oeil. 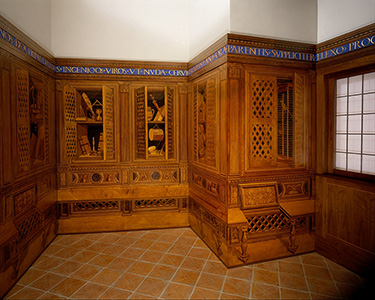 Before we move to the Studiolo Gubbio itself, let’s stop by the study of an ancient Roman, here by the entrance hall to the Metropolitan Museum. It will give us some of the common elements, the precedents, to the craft of thought in the West. This is a small, elongated room painted in strong reds, blues, and greens, lots of gilt. You received your closest friends in here, talked household business, did accounts here. Along the walls there are theatrical images, the masks of Janus, and idyllic scenes. The focal point of the room is a couch because it is traditional for meditation. It’s a rather hard one. Note the ornate ivory pillow rest, the carved ivory bedposts, depicting gods and characters from literature. There are friezes to view at every angle, and light pours in from the windows at the back.

In Roman education you composed while lying down. Meditation was done in a prone position; thinking was done horizontally. There’s a scene in Cicero’s Dialogue on the Nature of Oratory where they break for lunch. To answer questions from his students, one of the masters has a special couch brought to a room like this. He meditates his replies lying down with his eyes open. One of the younger men—who had asked a question earlier—comes in, recognizes this pose as deep meditation, respects it, and will not interrupt him. In our times, we have no poses that are recognized as meditation. The assumption, immediately upon seeing a man staring emptily into space, is “he’s idle; he’s not doing anything; he can be interrupted.”

This room is a playground for the mind. The masks of Janus, the theatrical themes, intentionally imitate Roman stage sets. So, what you have is a meditational setting and a theatrical notion of decoration because contemplation, thinking, is regarded as play. No, you wouldn’t fall asleep on this couch. Too hard for that. But, look, contrary to what we would expect, this meditation room is decorated with scenes of pleasure. They are theatrical, because to think is to enter the theater of memory. And memory, in classical rhetorical training, is a device of invention and composition, not a bin for the storage of information. It is not cramming for an examination, but to provide you with the materials for you to construct your own thought. You make thoughts in this world, you don’t just “have” them, and so the frescos, the images, are references to stories and scenes to provide you with the materials for thinking. That’s a very important idea to understand about this kind of memory work.

The prejudice against artificiality and theater comes from the Romantics and their notions about Nature and the individual. It’s endemic in our culture, but not shared by earlier cultures at all. In fact, what they wanted to do was to make a theatrical impression. Remember that at the time of the Republic it was the duty of every Roman citizen to speak at the Forum. He had to be able to speak persuasively to an audience of his fellow citizens in the public arena of the Senate or the Forum. In fact, the greatest indication of mastery in any rhetorically trained Roman was the ability to speak on any subject without notes, in whole sentences, mentally composing one’s speech with a discernible beginning, middle, and end, using extended quotations from the ancients and bringing stories and anecdotes to bear upon the subject at hand.

And the amazing thing is that they could do it. The reason they could is because they had developed a “well-furnished” mind, set out in a series of imaginary small rooms, small enough to compose, from the Latin for “to bring together” or “to gather together.” Later, that idea of gathering applies to prayer and it will become a major trope of Medieval monasticism.

“Mental furniture.” They took this idea very seriously. You were trained from childhood to furnish the rooms of the mind—because you cannot think if you do not have something to think with, and thinking is the mark of the citizen. The object of education, moreover, was to provide the young person with a kind of mental library of materials, of texts, stories, anecdotes that he could draw upon quickly, easily, and securely whenever he wished to engage in composition—literature, speech, a letter. And that idea never really left. Its focus just changed during the Middle Ages.

Now, let us move on down the hall and to the right to the Liberal Arts Studiolo from the Ducal Palace at Gubbio, Italy. Federico da Montefeltro, the Duke of Urbino, designed this room. It is very intimate, a mirror of Federico’s mind. Everything in it is true to what matters to him, and you realize at once that he played with thought here. Everything in it relates to him: the English Order of the Garter that stands over the doorway and reappears at the center of the main wall, and, inside a series of latticework closets, opening out from every wall, is a parrot in a cage, books, an ermine and other heraldic emblems of his nobility, scientific and artistic tools. Everything in here relates to memory, everything is a mnemonic token: something used to trigger recollection and to make him feel comfortable.

For example, the books were regarded as tools for memory, not alternatives to it. You used them for contemplation, for thinking about things. Reading at this time was generally done out loud. It was an intensive, engaged activity, not passive, as we commonly think of it. Reading was meant to engage the emotions and the mind. When you meditate, you do not purge the mind of emotion, but rather, you use memory to engage the emotions because emotional engagement was considered necessary to serious thought.

But let’s go back to this room. No one would have come into this room, except perhaps to clean. Meditation and the places where thinking occurs were sacred spots, and no one would consider entering a study without permission. It was understood from antiquity that one should compose in a particular place, a familiar space where you could tune out everything else. There were “rules” one followed: the room should be well-lit, but not too bright. Objects should be set out in definite, predictable locations.

If you were the Duke of Urbino, you would be charged up. Your first thought, your first feeling upon walking into this space would be: “This is MY thinking room. This is my room.” Not, “Gee, I am rich. Look at all these wonderful things I own,” but, “Mentally, I have come home. This is a quiet space and familiar to me. I am surrounded by my things.”

Now, in this space, I would read, write letters, think—but never sleep. No sleeping because I really look forward to thinking, to entering this theater of the mind and playing. I would surround myself with all that is familiar and beloved because it is the frame of mind that frees the mind. The belief is that routine frees the mind, it doesn’t deaden it. And you must remember, this is pre-Protestant, pre-modern times, so pleasure combines with education and memory. The objects that we see here—mandolins, harps, drums, toys, things for having a good time—speak to the ruling literary principle that all literary works are to delight and instruct. That is not an either/or proposition. It is a both/and: you must do both at the same time. For example, the parrot in a cage over here is both an example of the exotic and—by extension—a symbol of this man’s wealth and power. But I think it stands for something more: parrots are playful, they are fun, but parrots also imitate. Now, there’s good imitation and bad. But this image reminds me in some ways of those grotesqueries in the margins of (illuminated) prayerbooks. The prayer is serious, but the illustrations all along the margins are wildly funny.

Meditation is achieved by passing through a series of emotional states, some quite horrible—one does read of the “flesh becoming like pickles” in contemplation of Hell—en route to a final goal of glory. Where one begins in one’s readings and thought certainly depends on where one would want to end up.

In the 1200s, a professor in Paris described memory as a little chamber of delights. Memory rejoices in things that are short—taken in only a little bit at a time. It needs to be kept nourished and delighted at the same time. I don’t know why or when we began thinking that there should be no joy in thinking. Now, for a modem person to enter this room, your first response would have been that your mind would wander if it met with so much beauty, so many distractions. But, to this man, to antiquity and up through the Renaissance, the thought is that distraction keeps the mind going. That is the point: meticulous habits of mind in the company of all that is familiar and loved.