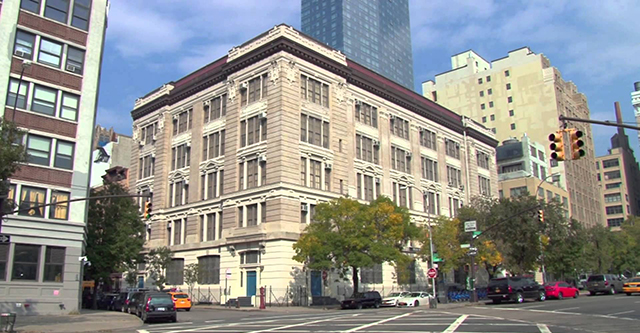 by Nathan Snyder and Jack Adam

The NYC iSchool, located in the SoHo neighborhood of New York City, is a public high school that does not operate like a traditional school, in that it charges teachers with creating engaging and authentic learning situations that help students understand the reasons for learning that transcend scoring well on exams. Teachers at the iSchool design modules where students work with companies and organizations to solve real-world problems. This process empowers teenagers to realize they can be the catalyst of change.

Modules offered at the iSchool include Clean Water Crisis, where students work with local water treatment plants to create new solutions to providing clean water to the ever-growing population in New York City. In Natural Disasters, Call-to-Action, students work with officials from the UN Office for Disarmament Affairs and atomic bomb survivors to learn about the effects of nuclear power plants and nuclear weapons. This module culminates with student-made public service announcements that are publically screened along with a gallery walk of student-made and curated artifacts. Creating opportunities for students to learn new content and apply it in authentic ways creates powerful thinkers, rather than students who simply memorize facts for the sake of gaining knowledge for tests.

The modules’ impact can also extend to solving students’ internal conflicts. My “This iBelieve Module” was inspired by Edward R. Murrow’s 1950s radio program, in which celebrities and everyday citizens read brief personal essays on the air that explained beliefs they held and the personal experiences that supported these beliefs. These five-minute readings required participants to express deeply-held beliefs in a way others would understand, and to which they would perhaps even relate.

In an age of accountability and standardized testing, writing personal belief essays is often overlooked in high school curricula, but I used Murrow’s belief essay concept to create a course that gives students an opportunity to voice their beliefs in a way that gives meaning to their words. Teenagers often feel misunderstood and voiceless. Providing a platform to express their understanding of the world and their role in it requires students to think introspectively about the actions and decisions in their daily lives. How do they live their beliefs? Can people observe these beliefs in action?

Achieving the lofty goal of helping students identify deeply held beliefs and think introspectively about why these beliefs matters is no easy task, as you can imagine. This nine-week course is broken into three units that focus on different forms of narrative writing: personal narrative, memoir, and personal essay. In each of these units, students build their personal writing skills, first by writing about a major event that shaped their personality, then incorporating imagery to build clearer picture for the audience, and finally focusing on the power of reflection. These units aim to cover the following Common Core writing standards:

Throughout the course, students and I participate in various writing activities paired with our exemplar texts, essays from ThisiBelieve.org, an organization that has updated Murrow’s radio program by pairing each essay with narrative podcasts to replicate the power of hearing these beliefs out loud, and often in the original writer’s voice. Both classic essays from the 1950s and modern essays from the site are analyzed in class to uncover ways of explicating belief.

From my 15 years of teaching experience, I can vouch that getting students to identify beliefs, let alone reflect on why they matter, often does not go smoothly. I incorporated two films into the curriculum: Jiro Dreams of Sushi (2011) by David Gelb and I Am (2010) by Tom Shadyac, to show how it’s possible to live your beliefs. We view these inspirational films and identify the beliefs that are being exemplified in the characters. What can be learned from Jiro, an 86-year-old man who has devoted his life to making sushi and perfecting his craft? How can Shadyac’s near death experience and personal quest to understand his role in life help us see what we truly value, and if we are doing enough to gain what matters to us? Students have to explain how they know these beliefs are evident in the characters’ actions and thoughts in short response writings that are used to drive whole class discussions. We use these films to identify the beliefs in ourselves and to help us portray these beliefs in our writing. Since beliefs are abstract ideas, seeing them in action helps make them tangible, quantifiable elements in our daily lives.

The students who take part in the This iBelieve Module are truly diverse. They are in grades 9–12 and come from various New York City boroughs, ethnicities, socioeconomic backgrounds, and religions. Having all of these students in class together spawns a myriad of rich conversations about what matters in their lives. We are constantly learning about different cultures and understandings of the world as we conduct peer-editing workshops to provide each other with feedback on writing techniques. We use each other to make meaning out of our own lives. I use the pronoun “we” because I have been writing my beliefs alongside my students. Everyone’s beliefs matter. Our connected goal is determining how to most effectively relay our beliefs to get others to listen and to help them identify their own.

We began the class as we begin all module classes at our school: with the end goal in mind. In This iBelieve, this goal was that by the end of the nine weeks we would all be able to write personal belief essays. Putting this on hold, however, we started with other kinds of writing: personal narrative and memoir. We learned about storytelling and creative expression and, through this, began to analyze our own short lives and the pragmatics of major events that we had experienced.

Once done with these essays, we looked to artists for their beliefs and ways of living and we analyzed these in the contexts of larger milieus. We fleshed out long lists of our beliefs and looked inward at every facet of our personalities, routines, and relationships. We thought about our educational, professional, and personal lives; ideas about politics, government, and law, and of society and humans. We refined our writing to remain personal and concrete through anecdotes and experience, and to highlight our own thinking and logical reasoning.

It was fascinating to have the opportunity to work with other students on such an intimate level. In class, we utilized two kinds of sharing. First, we anonymously wrote our belief statements on index cards which were read aloud by Mr. Snyder. This created a safe dialogue and allowed every student to receive questions and reactions to their idea. Later in the process, those who felt comfortable engaged in peer-editing workshops.

The issues people spoke out about and the personal stories that my peers shared were moving to say the least. It was bewildering to look around and realize that I was in a classroom surrounded by students whose voices I may have never heard aloud, yet each and every one of them was able, at their own pace, to share and elaborate on the beliefs they carry and act on daily. It was equally impressive to hear the nuanced responses to my own beliefs. Being one of the oldest students in the class, I was genuinely impressed by the different interpretations of my ideas and the unique viewpoints that students were able to approach my statement from. Through this, I was able to further develop my own opinions by considering how they are perceived by those who may not have had the same life experiences as me.

Nathan Snyder has taught English Language Arts for 15 years in various secondary settings: Worcester, England; rural and suburban Pennsylvania; and New York City. He currently teaches at the NYC iSchool in Manhattan, where he has taught a myriad of courses: Dystopian Literature, Shakespeare, Memoir, British Literature, Serial: Law and Evidence, Nuclear Proliferation, and more. Snyder is currently finishing his PhD in Interdisciplinary Research and Contemporary Literacy at Fordham University, where he is also an adjunct professor for various courses at the Graduate School of Education. Snyder is a managing editor for the Action Research Network of the Americas (ARNA) where he also presents and publishes annually on his current research projects.

Jack Adam is an internationally exhibited photographer. He is also a junior at the New York City iSchool. In his art he studies the parallels between surrealism and domesticity. He enjoys nonfiction books and essay writing.

Here is a sample of 24 iBelieve Essays. Click on the photos to read each essay.

'This iBelieve: Personal Narratives by High School Students' has no comments