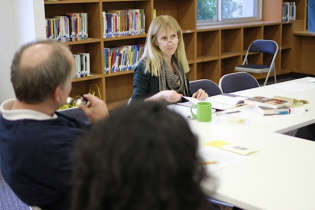 To write well, a writer must be willing to transform himself. If his work is to grow toward its full potential, the writer must hone his manuscripts, of course, but first he must become a dedicated student of the literary craft. This is not as simple as it sounds, as it requires that the writer surrender his position of knowing and embrace a position of curiosity and discovery.

Many who arrive at their first writing workshop believe they come prepared to learn, but it is the rare one of us who is fully primed for the word-arranger’s task. Learning to write is different from learning biology or math, or the other subjects one takes at school.  Clear answers are not obvious, if they are to be had at all. The process of learning to write can feel, for the memoirist or personal essayist, like placing one’s heart on a platter for others to poke, prod, slice, and wound. On the other hand, if the learning process is handled well, a student can feel that their tender essence is a valuable ruby in a gracious, bright-lit case being affirmed and celebrated.

The process of learning to write is a sensitive endeavor that flourishes and progresses best with a certain kind of support: wise, empathic kindness. There are many theories about the best way to support the writing process, but I would like to propose a less often considered approach, which is to gauge the developmental stage of the writer as a learner, and, in light of this, to discern how to support students through the three phases of the writer’s process: generating, revising, and polishing. In order to formulate the interventions that can best foster the aspiring writer, I have found psychologist Erik Erikson’s stage model of human development to provide illumination and direction, and have matched his stages to the phases in the writing process.

Erikson’s theory revolves around the idea that at each stage in a person’s life, a certain psychological task is confronted. That task may be either successfully accomplished or not, depending on the relational and environmental support the individual receives. The first two stages in Erikson’s model, which bear on infancy and toddlerhood, are Trust vs. Mistrust and Autonomy vs. Shame. If the child is met with nurturing responses from the world while grappling with these tasks, he gains first a sense of hope, and then a sense of will. Looking at the writer in the phase of first generating his manuscript, we may see that he is occupied with the same questions a small child might have, such as, “Is it safe to try to express myself? Am I crazy? Is the world around me safe? What will happen if I fail? Will anyone love me? Will I get knocked down? Will anyone pick me up when I fall? May I take joy in the effort, no matter how, as yet, staggering and flawed?”

In this phase, as the new writer—timidly or with confident bluster—puts his toe in the writing pool, the teacher ought to be a kind and nurturing parent. At this juncture, the writer is best met with mirroring as one might engage with a small child. The concept of mirroring is a relational approach of picking up on the verbal and physical cues of another person and reflecting this behavior back to the person. The result of this is that the person being mirrored feels seen and heard on a deep level. For new writers, mirroring can take the form of focusing on the strengths in initial drafts. The developing writer profits from feedback like, “This is a rich story. I see how much of yourself you’ve allowed your reader to see. There is so much promise here. This is such compelling and moving material. I love that image of the pheasant in the stand of trees. Please keep on!” If the writer receives the message that his earliest efforts are full of promise, that his story is delightful, that trying is fun, that he won’t be harshly judged, that he will gently be guided when faltering, he will gain confidence, a sense of trust, and a sense of “I can do it!” autonomy. His heart will be healthy and glistening and safe and full, and he will be poised for the next phase of his endeavor.

In this phase, a writing teacher could be accused of being too encouraging. One often notices in the classroom other judging students proud of their analytic prowess, frowning at such praise for a stumbling beginner’s manuscript.  They want to sputter, “But…!  But…!” But it is best to model, for them, what it is to wait. The “Buts” are for later.  For now, I believe that the student needs encouragement, and this encouragement is neither false nor foolish. I believe that everyone has an honorable heart and a worthy story to tell, and that any writing a person produces can be worked with, brightened, and honed into something better and better.  Each piece of writing, like a child, is in the process of becoming its fullest self.

For elementary and middle schoolers, Erikson proposes two successive stages, with their respective tasks to achieve: Initiative vs. Guilt and Industry vs. Inferiority.  Accomplished well, these stages solidify a child’s sense of purpose and of competence.  Writers learning their craft who have been assured that their efforts aren’t foolish are, at this point, ready to take on the long phase of revising their manuscripts. Certain of their basic goodness and right to stand on their own two feet—their right to write—new writers are ready to take initiative and to work hard to master words and sentences, paragraphs and entire chapters. They become eager to learn how to bring a character to life on the page, how to evoke a moment in a scene, how to muse on the page, and all the rest. Because the writer now possesses a stronger ego and greater self-support, he is open for some sensitive and direct suggestion from his instructor. The writing instructor can now offer more sophisticated feedback in response to what the writer has written, such as, “It would be great to have a little more description of Aunt Gertrude here,” or, “I would love to see that bit of summary about your brother’s stampeding the horses turned into a scene,” or, “Go deeper here. I think you have more to say about how fathers’ love of cars affects sons.” All of this presented in the spirit of, “Attending to this, that, or the other element of craft will make your already fine and heart-filled manuscript even more red-blooded and rich.”  Like a parent teaching a child to ride a bike or to dive into a pool, a supportive hand at the back works best. The teacher’s confidence in the writer and accompanying egging on will give the writer the courage to tackle and take on, and only in this way can he hope to become a stronger writer.

Erikson conceptualizes the last stage of childhood, adolescence, as the task of establishing Identity vs. Role Confusion. If accomplished well, the teenager emerges with a sense of fidelity. Likewise, and with adequate support, as the writer moves toward literary maturity he will emerge with a sense of proficiency, confidence in himself as a writer, and a belief that he can be true to his own vision and path. The writer is now able to see his writing as something separate from himself and his ego, and he dedicates himself, in this next polishing phase, to assuring that his writing is as well-crafted as he can possibly make it.

In my experience, the progression through these phases cannot be hurried, and a certain basic attitude on the part of the teacher serves the new writer best. In theory—and many, unfortunately, do this in practice—a teacher can blast the writer from the get-go with hard truths and harsh judgments, with bald, generalized comments like, “This piece is not working,” or particular and devastating ones like, “You’re not a very good writer,” or, “This scene is not convincing,” or, “That’s a cliché.” It is imperative that writing instructors show up to teach with sensitivity and awareness and commit to avoiding language that might shut a writer down.

The truth is, a writing instructor should hold himself as tenderly as he holds his students.  We should be easy on ourselves. We can only ever be “good-enough” teachers. Sometimes we fail to help a student learn to learn, or seemingly fail to help a student in any way at all. Some students don’t really want to learn to make their writing better. They come only to be admired, or to have their pain heard, or to repeat the same words over and over. Sometimes, hard as you try, you hurt a student inadvertently—or you aren’t able to manage a class sufficiently closely to keep one student from lacerating another. It happens. But most often, kind teaching works. Year after year, I have seen students arrive tentative, gain confidence, learn how to learn, bend toward their pages and shoulder the hard work of revision, and launch their writing careers.

I believe, as writing teachers and as writing workshop contributors, we should, first and foremost, encourage and support the developing writer. Our job is to find the strength in the work—sometimes just one or two phrases go beyond the commonplace—and tell the writer how effective, moving, sensual, whatever these passages are. To focus on the strengths—the many flashes of good prose that appear in a classroom’s worth of manuscripts—is far more instructive than a cataloguing of faults and lacks.

Erikson presented his stage model with his own proviso, cautioning that all of us are, always and forever, contending with issues of trust and mistrust, autonomy and shame, and all the rest. He believed that though these particular pairs of challenges are foremost at certain points in a child’s development, they are also recurrent and cycle in and out of prominence throughout life. It is the same with the phases of writing. A writer may be humming along, fixing his scenes, and suddenly need a shot of generative early phase encouragement. An instructor should be on the lookout for this. A writer is, in fact, often generating, revising, and polishing all at once, and each of these efforts needs tending. During a single workshop meeting, a student may benefit from encouragement, specific instruction in craft, and cheering on toward publication. And a workshop itself may have a parallel mix and trajectory as the instructor begins the session focusing on strengths, moves through technique, and then on toward ideas as to where a piece might find a home in the world.

About the Author:
Sara Mansfield Taber is the author of the new writing guide, Chance Particulars: A Writer’s Field Notebook for Travelers, Bloggers, Essayists, Memoirists, Novelists, Journalists, Adventurers, Naturalists, Sketchers, and Other Note-Takers and Recorders of Life. Educated at Carleton College, the University of Washington, and Harvard University, she has also published Born Under an Assumed Name: The Memoir of a Cold War Spy’s Daughter, the 2012 ForeWord Review silver medalist for autobiography and memoir; and two books of literary journalism, Dusk on the Campo: A Journey in Patagonia and Bread of Three Rivers: The Story of a French Loaf.  Her essays and memoirs have appeared in literary journals such as The American Scholar and newspapers including The Washington Post, and been produced for public radio. She has taught at Johns Hopkins University and the Vermont College of Fine Arts, and currently teaches at the Writer’s Center in Bethesda, Maryland, and leads writing workshops at her home.