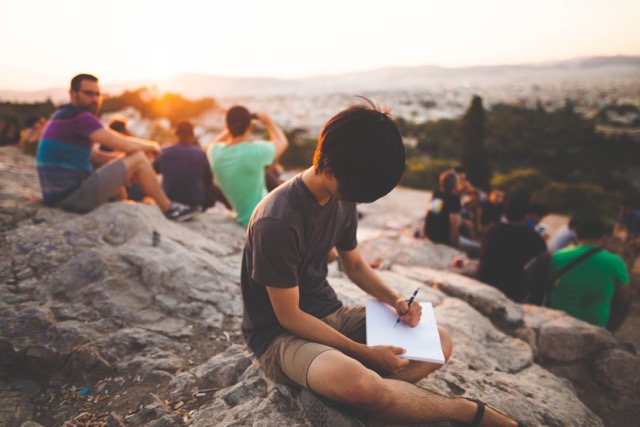 On a recent night in England, where I spent the fall semester teaching abroad, I ended up as I often did, sitting at a sticky pub table older than the Tudor dynasty, exchanging travel stories with friends. Doug, an expat from Ireland, began telling me a tale from his time in Vietnam. As he and his brother walked by a shoeshine stand, he said, a man reached out and grabbed Doug’s foot.

The shoe-shine man held Doug’s shoe—a slip-on Vans. Cloth base, navy and white checkerboard pattern, white rubber sole—and would not let go. “I can fix this,” he said.

Before Doug could stop him, the man removed his shoe and began hammering on a leather sole with a square heel, something fitting a man’s dress shoe. He then proceeded to smear white paste over the fabric while simultaneously asking for sixty dollars. At this point, Doug’s brother stepped in: “Dude, you’re getting ripped off. Come on.”

Of course, it was not cool. These were Doug’s only pair of shoes because he didn’t want to be “such a tourist” who arrived with six pairs of shoes for a six-day trip. And when the shoes were handed back, fashioned now with a leather sole and heel, sticky with white paste, they were utterly un-wearable.

I think about this story often and how it fits in to the broader context of the travel story: the slip-on cloth sneaker being refashioned into a dress shoe; the meta-narrative underlying any travel story where you realize you are creating a story—and seeking it—as life unfolds around you. And the intense desire not to be a tourist when there is nothing else you can really be.

As I mentioned earlier, I spent the fall teaching in England at an American college called Harlaxton, about an hour north of London. I taught two creative writing classes there to American students studying abroad. The program was safe, planned in advance, and mostly taught by American professors with American accents to American students. So naturally, every three-day weekend my students wanted to go adventuring, desiring stories and experiences and transformation. I couldn’t blame them; I wanted this too, but I also found there was a consumerist quality to it all: the desire to have something meaningful happen and the assurance that a train ticket to Greece and just enough money for beer, bread, and a hostel bed ensured that.

Along with this desire to have “experiences” was the desire to tell stories about these experiences, maybe in an essay or Facebook post, or simply an Instagram picture or scrapbook. Like most travelers, my students possessed an intense need to record their experiences, and sometimes to embellish them as well. I believe this is because at their core, the travel stories we tell are less about where we’ve been and what we’ve seen than an attempt to say who we want to be. Through them, we endeavor to create a self, expressing our underlying belief that experience creates essence.

This is one reason travel stories are fraught with problems, but there are others as well. And as a study-abroad student in both high school and college, I’m sure I made all the mistakes I see my students making now in their writing: The tendency to see one’s culture as primary; the inability to understand how the tourist’s presence changes the place they are visiting; the inclination to look at the locals as a group rather than as individuals. And these examples don’t even begin to approach the problem of the essays I see that unintentionally (or intentionally) support institutionalized racism and othering.

Doug’s story about his shoe, despite describing a mess of a moment, is actually a very good travel story. The lack of a lesson is part of its charm. How Doug presents himself as the fool, rather than the wise one, is also part of the charm. Doug’s story is not about using others as a way to understand the self, which is often a central trope in travel stories. Instead, it’s about the self as the other, and learning how to negotiate that.

As a creative writing professor at Harlaxton, I thought a lot about how to avoid the “and then I saw a poor child and realized how wealthy I was” story in my students’ writing. I avoided altogether assignments where the goal was to reveal a lesson in life. As we all know, life doesn’t happen like that. We are taught plenty when we least expect it—and often at our own expense.

Instead I focused my assignments for my students on how to record what they saw around them with the notebook and pen as their camera. I wanted to force them into being in the moment rather than trying to extrapolate from the moment. So much of life is mediated by the lens through which it is seen; I wanted my students to practice mindfulness, to go from being roving, rapacious Americans hungry only for “experience” to being present in the moment, focused observers of whatever place they happened to be.

When I returned home, it struck me that this type of writing practice needn’t be only for travel stories. I have since assigned these exercises to my students here in the US to help them practice seeing what is actually around them.

What follows are a few road-tested assignments and exercises that could be useful for an educator leading a study-abroad trip or a workshop at home. If the students are travelling as writers, I cannot stress enough the usefulness of holding a series of discussions about race, culture, and identity before the students leave. Two friends of mine, Aaron Bremyer and Dionne Irving Bremyer, who lead trips to Jamaica with their students from Saint Mary’s College in Notre Dame, begin the trip by having students read selections from texts such as Richard Delgado and Jean Stefancic’s Critical Race Theory: An Introduction. Discussing how to make students more aware of issues such as othering before they arrive in a foreign country is a worthy essay unto itself. This essay’s focus, however, is on exercises and assignments that can sharpen students’ powers of observation, helping them to see and record more clearly what is happening right before their eyes.

I start this assignment by presenting a couple of famous examples of the particular style or form I’ve chosen and providing students with an historical overview. I follow up that discussion with a field trip to where some of this work was created along with providing a few more examples, perhaps more contemporary ones that have innovated on what was begun there. Finally, I break down the structure for the students and have them try an imitation for the next class.

One of the most memorable experiences in England was taking my poetry class on a five-hour hike through the Lake District after reading Coleridge, Wordsworth, and contemporary examples of the Greater Romantic Lyric. First, though, I explained to the students the structural movements of this type of poem, which many had felt but hadn’t verbalized. I pointed out that the poems often feature a speaker who looks out upon the landscape, describes it, and in so doing, begins to mull over a personal problem or philosophy. The poems conclude with a change within the speaker and also return to the description of the natural landscape where the poem began. After we looked at some classic and contemporary examples, we hiked along the Coffin Trail, a famous walk that Wordsworth and Coleridge would take. We noted the contrasts of the Lake District (which are contrasts one finds in their poetry) such as the shadows and light, the highs and lows, the community and the isolation—and then we stopped by a grove of trees to write about what we were seeing.

Teaching students about forms that originated or were developed in their region—and then setting off with examples of it, a good trail map, and the challenge to write in that form—leads to a more authentic understanding of that country’s literary landscape.

As the poet Miller Williams told his class in Arkansas, “We admire perfection, but we can’t love it.” Successful travel writing embraces the fractured sense of a self that doesn’t have all the answers. It needs to convey the messiness of travel. The boringness of it with its endless toiletry bag packing and train station pacing. The vulnerability of it. The pride, let’s say of being a woman traveling alone, as well as the gnawing anxiety of whether you are safe. The sense of continually being slightly off-center—not sure if you are ordering your coffee correctly, even though you have bought a coffee every day for the past ten years of your life.

In the end, travel writing is a way to let us see what was always there. It is a way to practice how to record what is around us with our eyes and our pens. It is ultimately about being open to where we find ourselves, both body and mind, and the bottles or shoes that we encounter along the way.

About the Author:
Charlotte Pence’s first book of poems, Many Small Fires (Black Lawrence Press, 2015), received an INDIEFAB Book of the Year Award from Foreword Reviews. The book explores her father’s chronic homelessness while simultaneously detailing the physiological changes that enabled humans to form cities, communities, and households. She is also the author of two award-winning poetry chapbooks and the editor of The Poetics of American Song Lyrics. In the fall of 2017, she will become director of the Stokes Center for Creative Writing at the University of South Alabama.