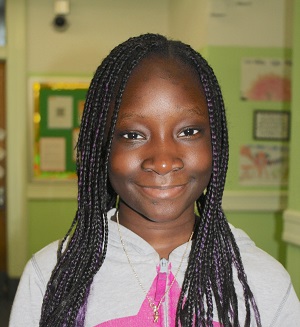 Aminata is the youngest of four children, and lives with her parents, originally from Senegal, in the Bronx, where she is a fifth-grader at a New York City public school.  She loves playing games on her phone, and was a student in T&W teaching artist Ibi Zoboi’s creative writing class this winter.  In an interview in January 2016 with Susan Karwoska, she emphasized that her favorite thing to write is opinion pieces because, she says, “I have strong feelings about things.”

Teachers & Writers: Do you enjoy writing?

Aminata: Most of the time, yes, except when my hand is aching. I’m able to talk about what I want and the ways I feel and the things I like.

And I really enjoy writing my thoughts down on paper. It can be hard because I’m not really used to letting people know about my life. Most girls in my class are girly-girls and I’m not like that.  I’m more goth.  I don’t like the color pink—I really think it’s quite revolting!

T&W: So what do you like to write about?

Aminata: Well, most of the time I only use my imagination when I’m really excited about a game or with my friends.  I really liked the lesson called “My Favorite Things” because I was able to talk about many things I like, including games. I usually only talk to three of my friends about games and the things that are important to me.

T&W: What do you think would happen if you wrote about the things that were really important to you?

Aminata: Well, it’s possible other kids might just say, “Oh, you’re this kind of a person, and that’s all right.”

I Am Minecraft
By Aminata

A hard survival adventure
with every step a block wide

Hunting animals
for food
to fill up my hunger bar

Working away my thumbs
on a big tablet

Surviving off
essential tools and weapons
like bows and arrows
swords, axes, shovels, and pickaxes

For my lesson on writing “I Am” poems, I asked the students to begin by creating a list poem of their favorite things. List poems are a great way to start a lesson because they allow us to focus only on words and white space on the page. They can also paint a whole picture, as the students learned when they’d completed this task. From these lists, we drafted our first “I Am” poems. We then discussed how the students could use imagery to create vivid pictures in the reader’s mind and the students incorporated it into their poems to describe their favorite things.

Aminata went above and beyond what was asked of her for this lesson. She had created a long list of favorite things and most of them were video games and characters in those video games, which she loves to play. She chose to write about Minecraft.

Aminata took huge creative risks in her poem by describing herself as a character in the game, rather than describing the game itself. By doing this, she was able to create lots of imagery in her poem. She took the reader on an adventure, and we were able to feel what she was feeling.  When she shared her poem with the class, I told them that this is what sensory details are supposed to do—make us feel what you are feeling with words. I also pointed out to Aminata that using strong verbs made her poem more action-packed. As part of her revision, I asked her to start each stanza with the verbs—“fighting,” “hunting,” “working,” “surviving.”

While Aminata was mostly quiet during the lessons, her poems spoke volumes. It was clear that creative writing is an important outlet for her.

Tagged: Young Writers of the World

'Young Writers of the World: Aminata' has no comments